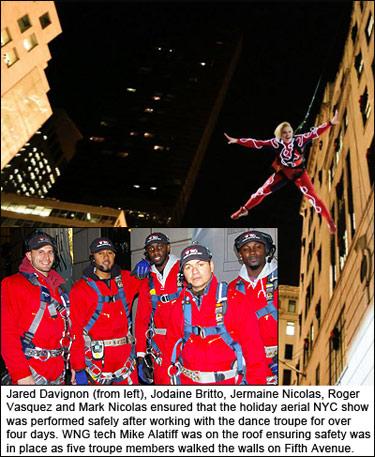 December 12, 2013 – Tower technicians often state that one of the true enjoyments of the profession is the varied projects and sites that they are able to assist with, each one requiring different and exacting disciplines. However, a crew from Wireless Network Group ushered in the holiday season with a truly unique rigging challenge. Safely drop a dance troupe from the top of a Fifth Avenue, Manhattan department store.

That’s what six crew members of Wireless Network Group were tasked with on Nov. 19, 2013 when luxury goods retailer Bergdorf Goodman unveiled their holiday window displays revealing what many from the fashion set consider works of art. For the first time it included a spectacular public event.

Hundreds of onlookers stared skyward in disbelief as a five-member Brooklyn-based acrobatic troupe, STREB Extreme Action Company, descended the iconic midtown building. The presentation was under the direction of award-winning choreographer Elizabeth Streb.

Propelled by pulsating holiday themed music, the dancers, standing at 90 degree angles, made it seem as though the facade of the building was the street as they walked their way down to their audience while throwing glitter and sparkles to the crowd, overshadowing the highly focused WNG crew on the sidewalk who orchestrated the lowering of the troupe in their show-stopping performance.

Although the entire acrobatics lasted approximately 10 minutes, according to Michael Fox, WNG’s President and CEO, the event took a number of days to plan and rehearse.

Since the crew could not rehearse on the Bergdorf Goodman building, there were three, three-hour rehearsal days on a 30-foot wall which was located at the STREB facility in Brooklyn.  Each dancer was coupled with a belayer based upon the performer’s weight.

The custom length slings were necessary to avoid any contact with the original slate roof on the building. Attached to the slings was a carabiner. They ran the rope through it with one end to the dancer and the other to the belayer.

Due to the larger surface area they used synthetic slings instead of rope over the roof’s edge because there were points where they would not be able to reach to protect the rope if it was used.

They also had the assistance of two additional SPRAT/riggers from Universal Steeple Jacks of NYC, who were located on the roof with separate gear ready for a rescue in the event one was needed.

Working around a sidewalk closure permit, crew members rigged the building the day before the event and brought safety system back on to the roof during the night for protection and to comply with NYC regulations.  The following day they had three hours to set up ropes to each sling and have everything ready an hour before the event was slated to start.

Crew members used a fisk to descend the dancers during the performance which had STREB’s troupe buffeted by almost steady 15-mile-per-hour wind and an occasional gust.

Davignon said it was locked out when the dancers came out of the windows and until the cue was given to start to descend which was signaled by the program manager through ear pieces from his position across the street.

“There was stopping, quick drops and continued descents during the whole event once they started their descent; so once started the fisk had to be kept unlocked and ready for the next move.  We also trained the helpers on the ground that were part of STREB to keep a hand on the rope just in case something happened to one of the belayers so that the dancers were still kept safe,” said Davignon.

Bravo’s Andy Cohen introduced the special event unveiling Bergdorf Goodman’s 35 windows with their designers’ nods to secular holidays, ensuring that there were points of interest from all vantage points – from their sidewalk, from a across the streets, from a cab or even from a vertical position 20-feet off the ground while tethered to an WNG employee.

Founded in 2000, Wireless Network Group is based in New York and New Jersey. The firm has offices throughout the Northeast and recently expanded into the Carolinas. The site development, integrator and maintenance contractor is currently servicing over 20,000 cell sites for RF/tower, HVAC, power and general maintenance. The company is SPRAT certified for controlled descent in NYC.

providing you flexibility to select the best solution that serves your needs.

getting the job right the first time.

insuring your needs are met on-time & with the highest quality.